One of my cool takeaways from CharCon this year was a copy of 5 Minute Dungeon that I won at the raffle. I was wondering when I’d get the chance to play it, and that chance game the day after a large pile of books arrived for me… 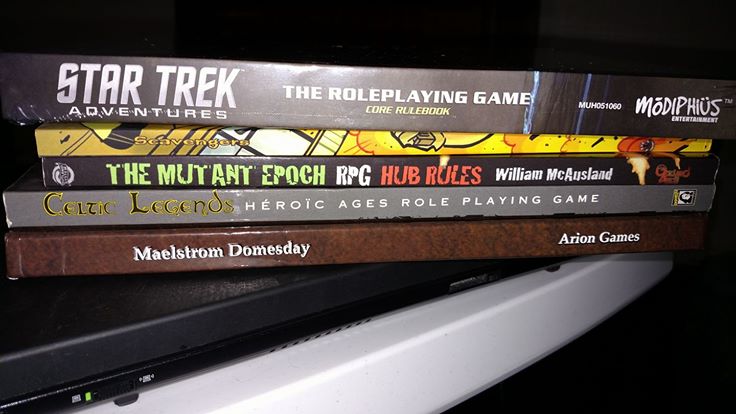 Not bad for checking the mail, ne?Not wanting to miss the opportunity, I dropped the books and went right into playing 5 Minute Dungeon with some friends, because why not?

5 Minute Dungeon is advertised as “The Most Fun You Can Have In Five Minutes.”

Playing the game involves players picking one of ten characters (max of 5 players), setting a five minute timer, then frantically try to clear the dungeon (including the boss) within those five measly minutes.

I lucked out and won a copy of the Kickstarter edition, which included a small letter thanking people for backing the game and a figure of the Baby Barbarian (Boss #1). These items are NOT available in the standard version.

Opening the box and seeing the letter.The game includes five double-sided character cards (10 total characters), five decks (one for each character deck), a set of boss cards/mats, a Door deck, and a collection of Challenge Cards for your deck. I believe there are a few differences between the retail and the Kickstarter version outside of the shape of the box, but as we didn’t open them both to compare, I’m only able to talk about the Kickstarter Edition.

Once the timer is set, the first card is flipped, and the insanity begins.

There are no “turns” in the game; everyone sees the card at the same time, sees what it takes to defeat the card, and play cards from their hand in order to do so.

Of course, as there’s a time limit, communication can fail, so players may play cards that are not needed (like two of the same card when only one was needed), weakening you for the challenges to come. As you need certain cards to defeat the challenges to move ahead, you are in a constant state of playing what is needed and throwing away anything you don’t need at that time with the hopes of getting something useful.

The game ends when time runs out, no one has a legitimate card to play against a Boss, or when all players run out of their decks.

The biggest appeal to the game is how quick and easy it is to get into. Setup takes moments (each player gets a character, the assigned deck, start with a monster, shuffle the doors, done), games run for 5 minutes (give or take; some cards stop the clock temporarily), and then you can either stop or go again.

One of the reasons why this game works for such a short amount of time is because of the rather simplistic rules. Each deck has cards of  five types/colors (Yellow Shield, Red Sword, Purple Leaping Person, Green Arrow, Blue Scroll) with a few extras based on the deck (wild cards, insta-kill, healing, etc). Challenges have a number of these symbols necessary to overcome them, and as long as they are played, you move along. Simple!

The card themselves are actually rather fun. Each Challenge card has comical artwork with rather amusing names, often being punny or being inspired by a particular bit of pop culture. The first one I saw was The Carpal Tunnel, and I couldn’t help but laugh.

On the note of challenges, each time you play the game will be different. Each boss has a set number of Door cards that need to be used, drawn randomly from the pool of all door cards. Then there are additional challenges (like mini-bosses) thrown in, based on the number of players.

Each deck, while similar, tends to have cards that are unique to that character class. For example, when I was playing the Wizard/Sorceress, I had cards that would auto-kill Monsters and Events, while the player of the Paladin had a Divine Shield to draw extra cards and pause the clock. It makes each character class a bit more unique from each other while also potentially showcasing their set abilities.

While it’s a little thing I love the fact that everything has a proper place in the box. Not enough games do that, so when I get it, I’m happy.

There isn’t much bad about the game, per-se.

Some people may struggle with the game simply because it is fast-paced, so if you are slow to read or have slow reaction times, you might not get as much fun out of playing a round.

One thing that irked my friends and I was rather simple: because of the fast pace of the game, we couldn’t really enjoy the wit, humor, and references within the cards. We were all more focused on what was happening and what was needed to move along, so we missed a great deal of the humor associated with what we were trying to overcome.

There is also a mechanical part of the game that causes more problems than anything. When you play a card to help against a foe (even if it’s just throwing it away), it goes to “the middle” and is swept away; they don’t go into your discard pile. In fact the ONLY cards that go to your discard pile are those caused by a card effect or by your special ability (usually “Discard 3 Cards for X”), and cards that “heal” you let you recover cards from your Discard pile.

This means that, if you had bad luck and threw away a bunch of cards and got to the boss with only your 3~ish card hand and nothing in your deck, you’re toast. It’s a rather frustrating way to lose the game, and we lost that way once, while losing again to the Goblin King mini-boss because we ran out of cards.

All in all, I think 5 Minute Dungeon deserves a solid 4 buns.

While the game is solid, some of the humor is lost due to the speed of the game, which also removes a number of potential players, and there are some issues with the overall mechanics.

If you like fast-paced, easy-to-pick-up games, you would be doing yourself a disservice by not picking up this game for your collection.

5 Minute Dungeon is available for purchase for $19.99, and you can read more about the game via the Kickstarter Page for the game.

One thought on “Most Fun You Can Have In Five Minutes? Reviewing 5 Minute Dungeon!”