I recently did a poll on Twitter asking what people would like to see, and the votes quickly skewed to random RPGs from my shelf. Thankfully, with some good wheeling and dealing, I’ve gotten a bunch of new-to-me books in that I’ve been slowly reading, giving me plenty of potential old(er) games to review.

The first one I went with was this odd little gem called Scavengers. It’s not an old game by any stretch, due to it’s indie roots, it may have possibly been forgotten and/or missed by some.

Scavengers is a game set during a Galactic Civil War between five factions: The Unionists, Patriots, Communitarians, Coriphate, and Techies. You are a member of the sixth faction, the Randians…also known as Scavengers, a name you wear with pride.

Scavenger crews quickly rush to a recent battlefield to take scavenge anything of value, whether it’s technology, cargo, or even people, and then rush back to their station to sell what they picked up and prepare for the next run.

It’s a dangerous life, but if you’re lucky, you’ll live like a king and be filthy, stinking rich.

Scavengers is a relatively short and quick read, only being 140 pages (with Index). The book starts off by explaining some of the usual elements (“What is an RPG”) before going into character and setting information.

Mechanically, the game is a simple d6 system: you take a number of d6 equal to the related skill (extras are added for bonuses), and count your successes (any roll of a 5 or 6). There’s also a “Risking It”mechanic to allow you to re-roll your dice pool (except 1, 5, and 6 results) to increase your chances of success at a cost. 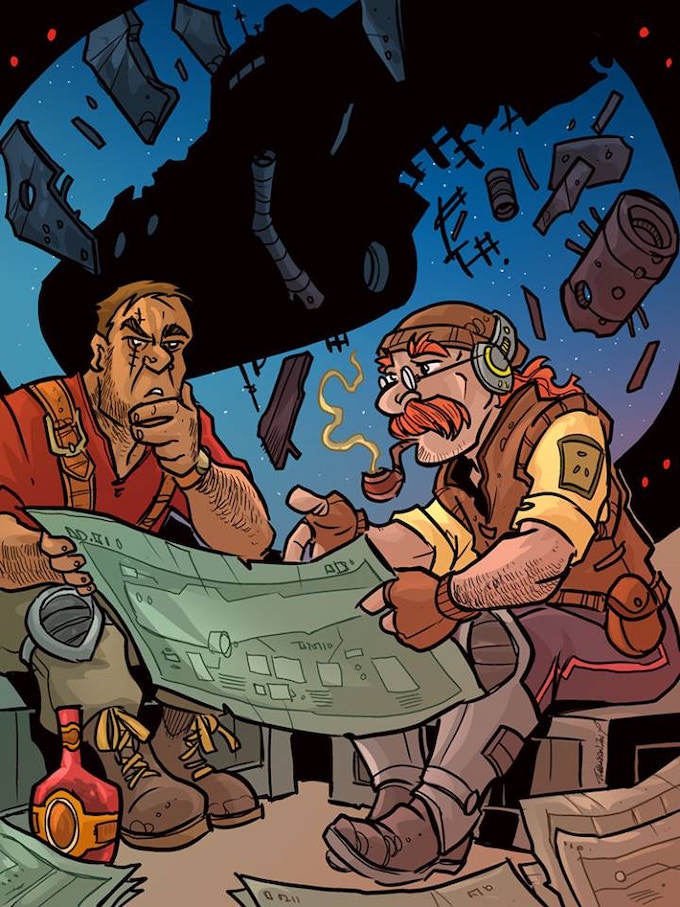 Overall, we’re given an easy to read game with a simple mechanic that is more focused on getting the game started.

One thing I love about games like this: they are written to hit the table quickly and let the dice roll easily. The game requires little prep beyond reading the book for the base rules and keeping it on hand to roll for ships. Simple as that. Character creation takes only a few moments (pick one of the roles, choose an ability, buy 10 credits in gear. Done.), adventure creation can easily be done on the fly, and sessions can be run in just a couple of hours. These elements make it an ideal convention game or a pick-up if people aren’t available.

I also appreciate that the game does not take itself seriously. There’s satire, stereotypes, and plenty of humor. There’s a group of drug-using assassins called the Hashishans, the Patriots are stereotypical Americans with big guns and eagles on their ships, and there’s even a celebrity that looks like Ruby Rhod. It is easy to tell early on that being serious is NOT the goal of the game as written, so some things that would be offputting (like the limited setting relying on stereotypes, the cartoon-y artwork, borrowing from various trope-filled elements like Star Trek, etc) are a bit more endearing than not. 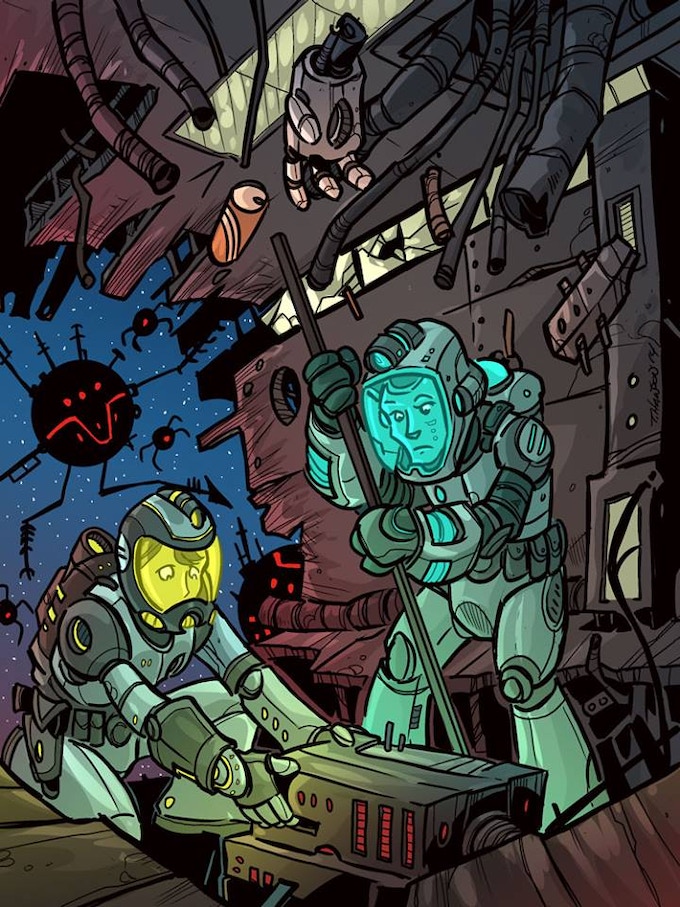 In fact, it is stated early on that these were used to help speed up play; the Universe itself doesn’t matter nearly as much when your only goal is to make money. You can reskin this into any universe and still make it work (a friend already said he wants to hack it into Firefly), so the setting-light is on purpose and explained early.

The biggest perk of this game, for me, is the list of ways to randomly generate ships and opposition. I can see myself repurposing the tables for random encounters in space, or if I’m debating on what’s wrong with a ship, I can just roll and use the results. I can see a ton of uses and permutations for Star Wars, Star Trek, Warhammer 40k, Starfinder, or even just a homebrew sci-fi game. It’s a good resource and worth grabbing for this alone, because there’s PAGES of this…and it’s all d66.

I also have to admit that I find the Danger Point system rather interesting. It doesn’t mark damage, but rather luck until one of these dangerous things finally kills you. Failing a roll could net you one or more Danger Points, while needing an ally to take over for you also nets a Danger Point (again, showing luck). It’s a rather odd yet effective system for a fast-paced game, and I think more games need to emphasize that the “damage” you take isn’t so much damage, but your luck running out.

Right out of the gate, the editor in me cringes while reading this. There are a plethora of typos, a number of incomplete sentences (and even paragraphs), and at times, even just clunky writing. I’m not too keen on it, and it knocks it down quite a few pegs.

I mentioned before the art is a bit cartoony, and while it is a bit endearing due to the lighthearted nature of the game, it’s a bit grating at times, especially after reading and reviewing titles like Starfinder and Star Trek Adventures.

I think one of my major gripes with the game is how it’s designed. When playing it, it feels more like a board game than an RPG. As you play, you take actions to move things forward, but your end goal is to get as much loot for yourself as possible, meaning you are hoping your allies fail so you can take over (and get paid by them), you’re hoping you can use one of your abilities and be paid by the other members of the crew to gain more cash, and if anyone dies, that just means less people to split the loot with. Considering this is the first RPG I’ve read that has a rule for a “winner” (whoever retires with the most cash wins), it adds that competitive board game element in, and I’m not that fond of that being in my RPGs.

I’m also not too fond of how short the games will be. Like Blades in the Dark and Paranoia, it’s not so much of an if your character dies, but when. To be specific, you can only take 10 Danger Points before your character dies, and after each mission, you roll a d6 for each Danger Point you’ve taken; for every 1 you roll, that Danger Point becomes permanent. This is also the only way to gain XP and get new abilities/skill points, so really, you have to increase your chances of death to get better.

While there are rules to prolong the game and to build actual campaigns, I just don’t think that the mentality/goals introduced in the game really fit for a long-term game of attachment to the story and characters. As I’ve previously said, it’s great for a one-off game at a convention or if your game plans fall through, but I personally won’t be running campaigns of this.

All said and done, I have to give Scavengers 2.5 buns.

I don’t hate the game, but I don’t necessarily love it, either. There are some redeeming qualities, but it is clear this game was made on a budget (the goal on Kickstarter was $5k, and they didn’t reach $9k).

Scavengers is a great pick-up game if things fall through, a random game for a convention, or just a hilarious thing to run with some friends and a few drinks. It’s really not that serious of a game, and campaigns aren’t exactly built into the rules, making this more of a short-term game than a long-term time investment.

If you like competitive RPGs with some slapstick, then absolutely go pick up Scavengers. If you want a decent resource for randomly generated ships and what’s wrong with them, it’s still worth the time and money.

If you like your games more serious and long-running, then you may want to look elsewhere.

Scavengers was written by Karl Larsson and produced by Metal Weave Games. You can purchase the PDF for $15 on DriveThruRPG (as well as the $4.99 expansion for the rules), or you can pick up a print copy from Amazon or similar retailers for $24.95.

I’ve been hard at work reading my RPG backlog to start a “From The Shelf of the NPC” series, so you could expect more of these in the future as I finish the books and write the reviews.

Next week, I’ll be dropping a review of a Bag of Many Dice I picked up from The DM’s Wife RPG Shop, a bag and shop I mentioned last year when I wrote about the Mimic Dice Bag. After that, there’s still plenty I’ve been reading from the shelf, as well as another new title arriving. Stay tuned!