Kickstarter is a wonderful and dangerous tool, as I am sure any RPG fan can attest. Combine their algorithm with my Twitter feed, and I’m surprised I don’t spend more than I do on RPGs. Granted, funding is a stopgap, but that’s another topic.

While I was a bit lukewarm about Diogo’s Solar Blades and Cosmic Spells, there was enough there to make me interested in picking up more of his work. When I saw the Kickstarter for a “Zine RPG Trilogy” I put in the money for print copies and took my chances. 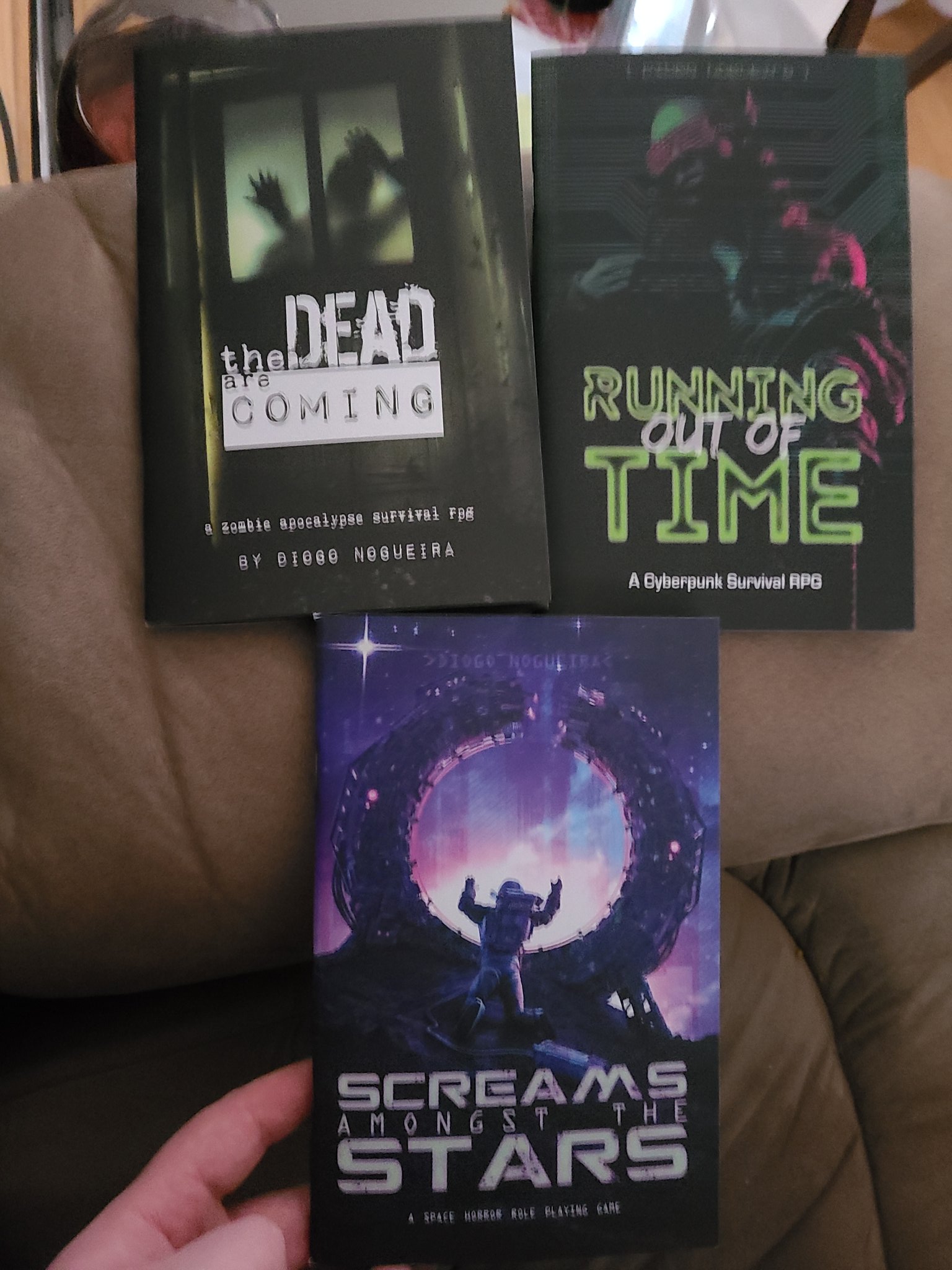 Powered by a minimalist OSR mechanic inspired by Electric Bastionland, these three zines are pitched to provide a fast, narrative-focused game in one of three settings: A cyberpunk dystopia where time is literally money (Running Out Of Time), a zombie apocalypse (The Dead Are Coming), and a space horror game (Screams Amongst the Stars).

Each of these three zines comes in a full-color design (colored backgrounds and fonts), and spans 44, 48, and 64 pages, respectively.

All three games function mechanically similar: you have three stats, and when the dice come out, you are rolling a d20 and rolling beneath your stat. Combat is quick, with all attacks automatically hitting, and damage ratings that could lead to one-hit kills.

Each book starts off identically: the basic premise, character creation, and tables to help randomly generate who you are (including name tables).

Running Out Of Time spans 44 pages of neon-hued zine. Based off of cyberpunk dystopias like Blade Runner and In Time, your characters are in a dangerous setting of survival, where time is literally your currency for the world; run out and your dead.

The Dead Are Coming spans 48 pages of zombie apocalypse. With backgrounds that feel like they are stills from various films of undead horror, your characters try to survive the undead wasteland by scavenging whatever they can. Unlike some zombie games, this is focused solely on the post-zombie lifestyle, when this is your “normal.”

Screams Amongst the Stars is the largest at 64 pages. With nods to sci-fi horror like Event Horizon and the Aliens franchise, as well as to other tabletop RPGs like Mothership, this particular zine lets you build a spacer heading out into the black vastness of space to explore and survive.

If you’re into any of these genres, then the zine is a good way to get into tabletop gaming within that genre. Each title has everything you need to run the game in question at a low enough price point to not break the bank. Additionally, if you’re coming in from a D&D or related background, you already have all the dice you’ll need to run the game.

Mechanically speaking, the game is simple to grasp: nothing here is truly convoluted, and the rules are surprisingly light for a OSR game set on survival. I can see most readers picking this up and, within a couple hours, have it read and be ready to run it.

While the combat side is absolutely brutal (all attacks automatically hit, and literally, one hit can kill you), the fast character creation lets you get back into the action. It reminds me both of Mothership, where an errant hit can kill out outright, and Paranoia, where rapidly changing characters is not unheard of. While this approach isn’t for everyone, and those who know me know this isn’t my preferred way to go, I find the combination of fast creation meeting potentially fast death a decent balance.

My biggest love of these titles? The tables. Even if I’m not going to run the games, having tables for names, random appearance or personality quirks, or even ship critical hits is nice. Each of these titles includes tips for missions, including problems that can be randomly generated, and in the case of Screams Amongst the Stars, a whole 27 pages of jobs and locations by government/organization, as well as random events to deal with in space.

While I love Diogo’s work, there are a couple of complications with these zines.

The first is a presentation concern. While I can forgive using Justify as an alignment (I just find it odd to have a three-word line), the one snag for print copies is the color scheme. While I normally like light text on dark backgrounds, the choices can be difficult to read for those who suffer from color blindness. For those like myself that have other sight issues, the text overlay on a “busy” image make it a bit harder to read, leaving me wishing for a printer-friendly version of the PDF (and detracting a bit from the print copies).

If you snagged all three the way I did, you’re paying for a good bit of repetition; each game has a separate currency mechanic and some item tweaks, but otherwise nearly 20 pages are redundant information when you read them all back to back. While this is great if you love the mechanic and want to use it in multiple genres, it is a bit blah to read the same sections repeatedly.

Not counting it against him but noting it for those “sticklers” out there: while a stark improvement over Solar Blades, there’s still some language hang-ups that don’t quite feel “right” when reading. Please keep in mind that English is not Diogo’s native language, so while there are a couple snags here and there, it shouldn’t impact most readers that don’t have my same background in editing.

All said and done, I’d have to give the Zine Trilogy, as a whole, 4 Buns. The sheer value of Screams Amongst the Stars tips it out of the 3.5 range and safely at a 4.

Standing alone, each zine is an individual setting with a simple mechanic and enough to get one or more games running just with what’s inside. When combined, many doors are opened, and even without using them to run the game as-is, they become toolkits to keep on hand for the individual genre or game style.

While there’s some snags here and there, the biggest challenge will come to those who can’t read the color-on-color text or for those that loathe OSR-style games.

In short, if you like the genre in question, enjoy OSR games, or want a toolkit for a specific game style, be sure to pick one or more of these up! If you dislike OSR, want more lifespan to your character, or don’t jive with the genres, then give these a pass.

The Zine RPG Trilogy, consisting of Screams Amongst the Stars, Running Out Of Time, and The Dead Are Coming, are written by Diogo Nogueira of Old Skull Publishing, and the titles themselves are being distibuted by Gallant Knight Games. Each is currently $9.99 as a PDF, can be found on the Gallant Knight Games store, with softcover and Print On Demand options coming soon on that page and via DriveThruRPG (link for Screams Amongst the Stars, my favorite of the three).

Anthony, better known as LibrariaNPC, wears many hats: librarian, gamemaster, playtester, NPC, game designer, and our Editor-In-Chief. You can support his work on Patreon, his tip jar, via Ko-Fi, or by buying his games.